For any enquiries please email at: info@corbyloch.co.uk

Corby Loch covers an area of 32 acres and is situated approximately six miles from Aberdeen city centre in the low hills a few miles north of the Bridge of Don.

The loch is well signposted from the B997 to Parkhill off the Parkway (A90) from the south and from the B999 to Potterton off the A90 from the north.

Because of the flora and fauna in and around Corby Loch and Lily Loch to the west, both lochs form a Site of Special Scientific Interest (SSSI) designated on 26th October 1983 as shown in the map. 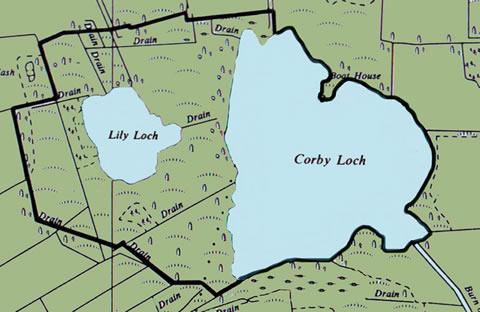 The requirements of the SSSI are managed by the Scottish Natural Heritage (SNH).

On cessation of the extraction of water to supplement the power for the Mill of Mundurno, further downstream on the outlet burn, the loch became shallow and unmanaged. In spite of development over recent years as a natural ‘fishery’ it is still comparatively shallow, the average summer water level being a uniform depth of between three and four feet. As the loch is fed from a large area of marshy scrubland to the north known as the Red Moss, after periods of heavy rain the water level can rise quickly in a few days.

Being a natural loch Corby and the surrounding area abounds with wildlife and apart from wildfowl and birds of prey you may be lucky enough to see otters, stoats, foxes and deer amongst others.